I was mowing the lawn and Joyce came out the door with a pan of water, intent upon watering her Christmas cactus on the side front porch.   She took a step forward and out of the corner of her eye saw something peculiar in the azalea bush, just inches away from her potted plant.  Another look made evident a fat, multi-patterned snake sleeping 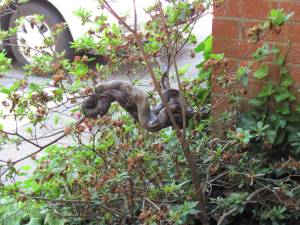 peacefully about 18 inches up into her prized azalea bush.  In a moment of shock she took steps backwards and fell down, spilling the water over herself, simultaneously yelling to get my attention over the roar of the lawn mower.

With some initial assistance from our mathematician/computer scientist neighbor from across the street, I was able to knock the snake into the ground-cover ivy where I flailed away with a hoe until the snake was sufficient damaged to get it out onto the grass where I severed and dispatched the creature.  Sadly the azalea bush was left much the worse for wear and hoeing.  Our next-door mathematician neighbor brought his tape measure and we announced that the snake was at least 40 inches long.

I sent a picture of the snake (which Joyce  had valiantly secured) to a professor at the University of Kentucky.  He assured me that it was a “rat snake; very common and beneficial as its pri

mary food is mice.”  This does sadden me since it would be good to have a community benefactor in the ridding of mice but maybe that function will return to being the job of the neighborly cats.  On the other hand some of the neighborhood (including Joyce!) are glad to limit the encounters with azalea-climbing serpents.