Linking to the WWT lesson from last week (April 15, 2012), we considered THE ULTIMATE QUESTIONS as applied to Mark 11 and 12.

I am affirming that “how” should be included because of its various meanings such as:

and their respective pertinence to the observations of Jesus about giving.  HOW did the widow give the money?

Halford Luccock summarizes the points well in the following statement:

The distinguishing mark of the widow’s gift, however, was not merely its proportion to her means;  there was something in her heart that lifted the gift out of routine into the realm of sacrifice.

We all know only too well the easy, reasonable justifications she might have had for withholding her two copper coins:  “What difference could a penny make?  It is so small it will not count at all.  Let those give who can afford it.  I really haven’t got a penny to spare.  No one will ever notice whether I drop in anything or not.”  We know the case for the defense from start to finish—and at the finish the two coins are in our purse.  Jesus’ recognition of the greatness of the gift knocks over our shabby defense.  No gift of love is too small to count; nor can any life be excused from the grace and duty of sharing.  Nothing escapes the notice of the God from whom no secret is hid.

This scene in the temple starts our minds out on journeys of remembrance.  How great and many have been the gifts which have come out of poverty!  They have been gifts of life, of thought, of skill, of devotion.  The support of the church throughout the world has come far more from the two coppers of the poor than from the large checks of the rich.  Paul is not the only one of whom it may be truly said, “as poor, yet making many rich” (II Cor. 6:10).  (from the Interp 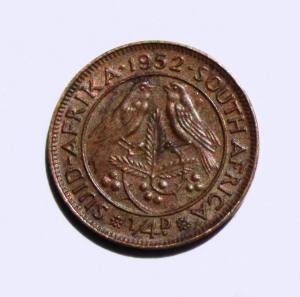 [The picture to the left is that of a farthing or 1/4 of a penny in the British/South African systems discontinued in the 1960’s.  12 pennies to a shilling and 20 shillings to a pound.  One penny equaled 1/240 of a pound.]

This entry was posted in Wrestling with Truth and tagged pennies, reality, ultimate questions, widows mite. Bookmark the permalink.