Posted on November 20, 2011 by Hillside Laughter 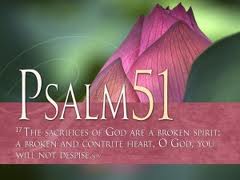 Using 1 Samuel 13 and 15, and 2 Samuel 11 and 12 as background, we addressed the tragic stories of Saul and David as they proclaimed “I have sinned” in response to the words of the prophets Samuel and  Nathan, respectively.

We outlined the sins of these two men.  Saul: arrogance, disobedience, jealousy, impatience, witchcraft.  David: adultery, murder, deceit.  We compared the severity of these sins.  Did one man sin more than the other?  Why was David forgiven and Saul not?

The sentiment was that sin is sin but there was the recognition that some sins have greater interpersonal implications than others.

Then, the main thrust turned to the steps (the order is not final) in redemption from sin toward salvation:

We were moved by the prayers of repentant prayer by David given to us in Psalm 32 and Psalm 51 which were read out loud for us.

David was forgiven and restored because of his heart-attitude of humbleness and his commitment to changed behavior.   Saul was not forgiven due to his continuing heart-attitude of rebellion which was reflected in his failure to change and his persistence in making excuses for his behavior.  David acted responsibly; Saul did not.

This entry was posted in Wrestling with Truth and tagged REPENTANCE. Bookmark the permalink.